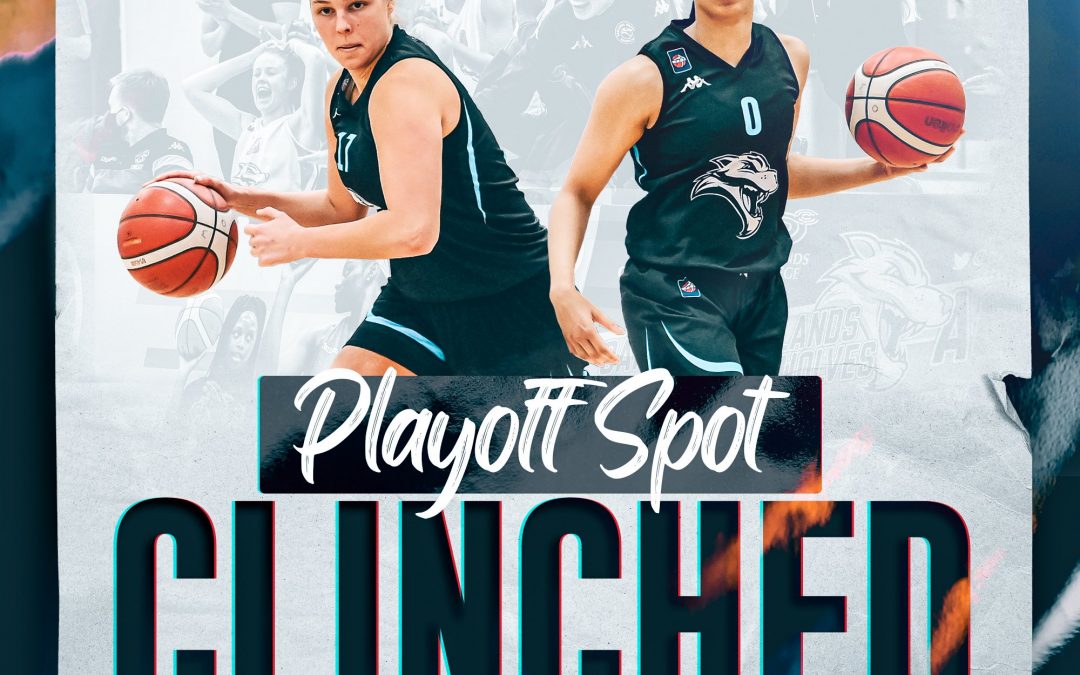 Two wins from three games in as many days ensured that Wolves will take part in the WBBL play-offs this season.

After the wolfpack clinched the final WBBL play-off place on Friday evening, with an impressive 70-46 home win against Cardiff Met Archers, coach Lee Ryan’s side go into their final regular-season game against Nottingham Wildcats this afternoon, knowing a win will lift them to seventh.

Led by Greeta Uprus’ 15 points, Ryan’s team led from tip-to-buzzer and never looked back after an 8-0 start, wrapping up a place in the post-season playoffs with three games to spare.

Ryan was a happy man after his side won the first of three games in as many days: “It was a great win for the team today!” he beamed. “It was a vital game in our play-off push and the players were locked-in and focused.

Credit to Cardiff for always fighting, especially after our strong opening to the game, but the players knew the importance and had answers throughout. The Durham game will now give us an opportunity to rest a few and play some juniors up, then lets see the scenario as we head into Sunday against Caledonia”

Uprus converted three triples – including the opening two scores of the game – and added seven rebounds, while Beth Sarson went four-from-seven from downtown to finish with 12 points. All nine Wolves’ players who stepped on the court got on the scoresheet, with nobody playing more than 29 minutes – Amari Carter leading the way in court time as she missed out on a double-double by a single point. A depleted Archers side were led by 14 points and seven boards from Shannon Hatch.

Wolves dominated inside the paint. out-rebounding the Welsh side 47-29 and scoring 24 points from short range.

Carter capped the 8-0 start after Uprus’ pair of triples, but Wolves continued to dominated with treys from Carter and Sarson, and Merissa put them 22-9 ahead before Archers finished the quarter strongly to cut the lead to 22-15 at the first break.

Uprus opened the second period scoring, but five quick Lewis points saw Wolves’ lead cut to the 24-20. That was as close as Archers came as Lizzy Harrison hit a jump shot before Uprus hit four points to make it a ten point game, and scores from Dorka Boros and Quick sent Ryan’s team into the locker room leading 36-23.

Sarson hit another triple to start the second half before providing the assists for Lauren Milligan to make the score 40-23, and five more Milligan points together with an Uprus trey saw Wolves lead 54-31 at the final break.

Harrison and Sarson hit early threes as Wolves’ lead grew to 24 after two fourth period minutes, and the win was wrapped up another Sarson triple before 15-year-old Grace Strickland ended things with another score from downtown.

Saturday saw Ryan give debuts to Strickland’s under-16 team-mates Tamara Smith-White and Miriam Menendez, with academy player Sophie Bears also getting minutes for the first time this season as they went down 74-54 against Durham. All of the youngster got plenty of court time with Boros and Quick rested, and they made a good start with Strickland’s trey sending them into the first period leading 21-13.

The visitors quickly erased that lead early in the second period and although Harrison put Wolves back up five with a triple, Durham closed out the half on a 15-4 run to lead 43-32 at half-time. A pair of Menedez free-throws got Wolves within seven heading into the final three minutes of the third period but Durham scored the final four points of the period before dominating against a clearly tired Wolves team to outscore them 16-7 and wrap up the win.

Harrison led Wolves with 14 points, while Milligan added eight points, five boards and as many assists with Strickland hitting two treys in her seven points.

A strong second half proved key as Wolves completed an exhausting 45 hour period with an 85-71 win against Caledonia Pride on Sunday.

Led by 21 points and five assists from Carter, Wolves outscored the visitors 49-36 in the final 20 minutes to move up to seventh in the table.

Boros added 15 points while Harrison and Uprus had 13 points apiece, and Milligan had six points to go with her 11 rebounds.

Uprus’ three-pointer capped a 12-4 start as Wolves led throughout the first half and a jump shot from Boros sent them into the first break leading 25-22 before Strickland’s three helped the hosts take a narrow 36-35 lead into the locker room.

The Scottish side took a couple of brief leads early in the second half but Milligan put Wolves back up by four before five straight Boros points – including three-from-three at the foul line – sent the host into the final break with a 57-50 lead.

A triple from Uprus made it an eight point game early in the fourth period and scores from Beth Sarson and Uprus made it a 12-point game early in the fourth period. although Maud Ranger (who led Pride with 20 points and 13 assists) cut the lead to five with four minutes remaining, four Sarson points and a Carter and-one took the lead back into double digits as Wolves closed out their seventh league win of the campaign.

Any cookies that may not be particularly necessary for the website to function and is used specifically to collect user personal data via analytics, ads, other embedded contents are termed as non-necessary cookies. It is mandatory to procure user consent prior to running these cookies on your website.